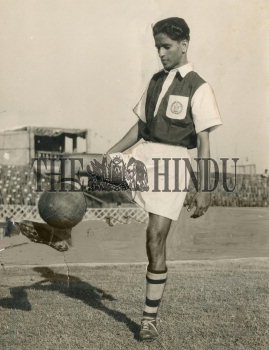 Caption : Indian Football player RAMANA Rao, hailing from a family of footballers (Butchi Brothers), RAMANA Rao started playing soccer from his school days. He led the Andhra Vasrsity team in 1956. He has been playing for his State since 1954. He is one of those selected for coaching at Cuttack. Photo shows RAMANA Rao in action during a practice session. (Published in Sport and Pastime on March 29, 1958). PHOTO: THE HINDU ARCHIVES