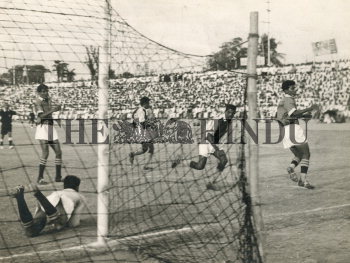 Caption : Muthu, the Mysore goalkeeper, saves a shot from Kankidass of Railways during the National Football Championship for Santosh Trophy held in Bangalore on January 03, 1963. Mysore beat Railways by a solitary goal to enter the final of the championship. (Published in The Hindu on January 04, 1963). PHOTO: THE HINDU ARCHIVES