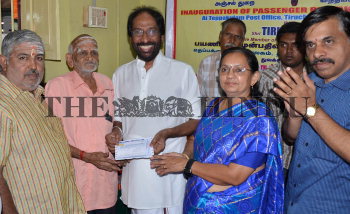 Caption : TIRUCHI, TAMIL NADU, 21/02/2015: Tiruchi Siva, MP, handing over a railway reservation ticket, to a passenger at the inauguration of Passenger Reservation System at Teppakulam Post Office in Tiruchi on February 21, 2015. MANJULA Rangarajan, Divisional Railway Manager, and J.T. Venkateswarlu, Post Master-General, Central Region, are with them. Photo: B. Velankanni Raj