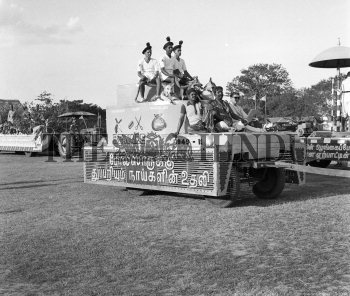 Caption : Three police dogs sitting on a high pedestal with three typical offenders a MURDERER, a thief and a smuggler sitting at their feet, which was one of the 14 tableaux in the Pageant arranged in connection with the Madras Police Centenary celebrations at Rajaratnam Stadium in Madras on August 31, 1959. PHOTO: THE HINDU ARCHIVES