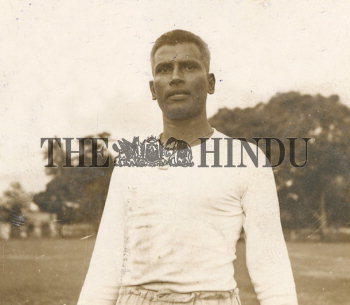 Caption : Kadirvelu was the much talked-of man in soccer circles in Bombay, for as the goal-keeper of the Western India Automobile Association (W.I.A.A.) he was greatly responsible for his side winning the Heinrich's Memorial Shield, Nadkarni Football Cup and Western India championship tournaments. (Circa June 10, 1954). (Published in Sport And Pastime on July 17, 1954). PHOTO: THE HINDU ARCHIVES