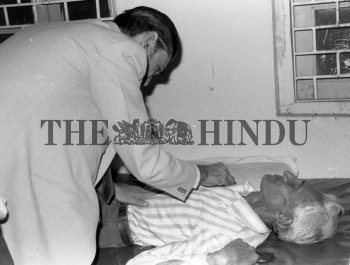 Caption : BHOPAL GAS TRAGEDY: General weakness, recurring respiratory and breathing trobule and burning sensation in the eyes were the common complaints of people to be treated from various hospital in Bhopal after a deadly poisonous gas leak from the Union Carbide factory. Photo shows doctor attending to patient. (Circa December 1984) PHOTO: THE HINDU ARCHIVES