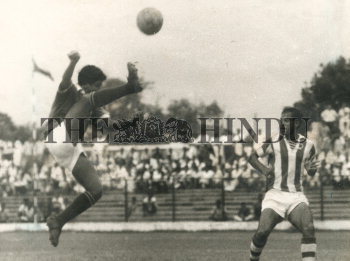 Caption : Central Railway's full back jumps and clears the ball as Southern's Krishna Singh (right) looks on during the Inter Railway Football tournament at the Nehru Stadium in Madras on August 14, 1967. PHOTO: THE HINDU ARCHIVES