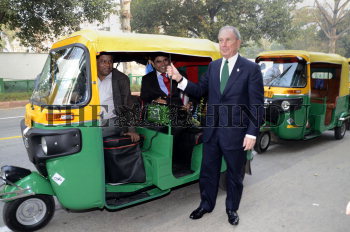 Caption : NEW DELHI, 16/02/2015: Michael Bloomberg, UN Secretary General Special Envoy for Cities and Climate Change getting off from an auto rickshaw to speak at the RE-Invest Forum 2015 at the Ashok Hotel in New Delhi on February 16, 2015. Photo: Meeta Ahlawat