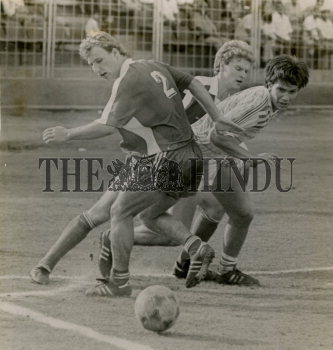 Caption : Right of way is what Hungary's Robert Jovan (middle) is seeking in the Nehru Gold Cup football tournament held at Margao on January 22, 1989. Denying him the right is Poland's Adamcruk (No. 2). Hungary won 5-1. (Published in The Hindu on January 23, 1989). PHOTO: THE HINDU ARCHIVES