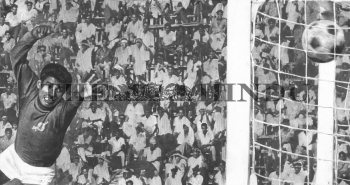 Caption : Janardhan, the Mysore goal-keeper, stretches his hands fully but fails to stop the ball shot by Gurung, which LODGES at the net. It was Assam's equaliser. Mysore won 3-2 and entered the quarter-final of the National Football Championship for Santosh Trophy held at Nehru Stadium in Madras on May 01, 1971. (Published in The Hindu on May 02, 1971). PHOTO: THE HINDU ARCHIVES