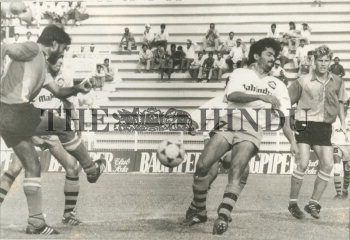 Caption : Darbara Singh of East Bengal (extreme left) surprises Lakshman Bisht as his teammate Neil Edmonds looks on in the semifinal of the Durand Cup football tournament in New Delhi on October 26, 1991. East Bengal beat Mahindra and Mahindra 3-0. (Published in The Hindu on October 27, 1991). PHOTO: THE HINDU ARCHIVES