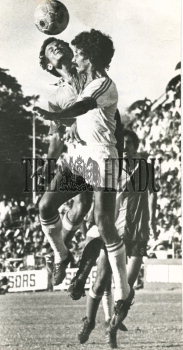 Caption : East Bengal's left-half Farid (left) and skipper Oscar reach for a header as E. Bengal's striker Nassiri looks on during the Federation Cup Football Championship match between East Bengal and Salgocar in Madras on May 01, 1981. PHOTO: THE HINDU ARCHIVES