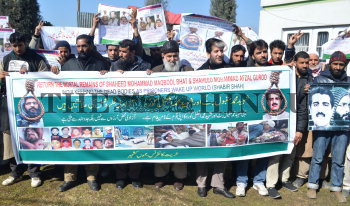 Caption : SRINAGAR, JAMMU AND KASHMIR, 10/02/2015: Separtist leader Shabir Ahmad Shah along with his supporters carry out a protest rally while demanding return of mortal remains of Mohammad Maqbool bhat and Mohammad Afzal Guru in Srinagar on February 10, 2015. Photo: Nissar Ahmad