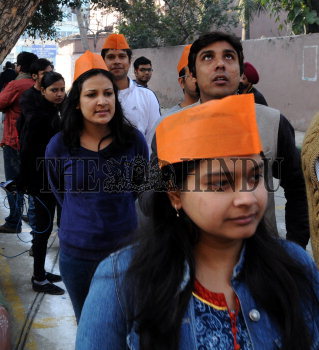 VOTERS AT A POLLING STATION AT B. K. DUTT COLONY

Caption : NEW DELHI, 07/02/2015: Some of the BJP supporters wearing caps at a polling station to cast their vote, at B.K. Dutt Colony, Lodhi Road, in New Delhi on February 07, 2015. Photo: Shanker Chakravarty