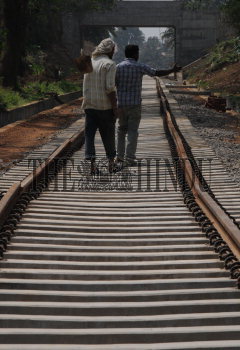 Caption : PALAKKAD, KERALA, 01/02/2015: The work on gauge conversion of Palakkad-Pollachi railway line, which has been going on for sometime, is estimated to be scheduled by March, 31, 2015. The renovation of the 55 km Palakkad-Pollachi included the work on seven major bridges, 178 minor bridges and 28 level crossings, renovation of the platforms and signal systems, as told by the railway officials to M.B. Rajesh M.P. A scene from Robinson road level cross on February 01, 2015. Photo: K. K. Mustafah