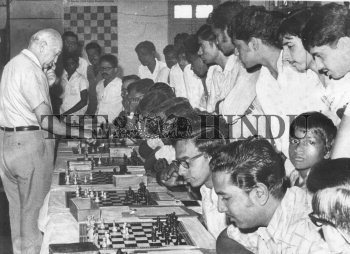 Caption : The visit of world-ranking players from time to time has been of much value to Indian chess. MIGUEL Najdorf, the Argentine Grandmaster made quite an impact on the followers and players of the game when he made a short trip to this country recently. Our Staff Photographer has caught the chess celebrity planning a quick move, when he played simultaneous display against 20-odd players at Madras. (Jothiprakasam, the recent Kasturi Cup winner is at extreme right and Vijayaraghavan, the National junior champion is next to him). (Published in The Hindu on April 08, 1972) PHOTO: THE HINDU ARCHIVES