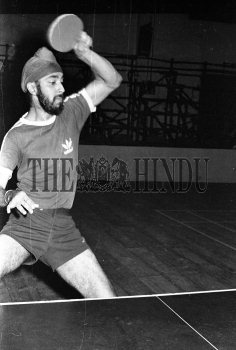 Caption : Manjit Dua seen in action against R. Sekhar during the semi-final of the men's singles event in the Parry's Sports and Recreation Club Table Tennis tournament at the Corporation Stadium in Madras on September 23, 1978. PHOTO: THE HINDU ARCHIVES