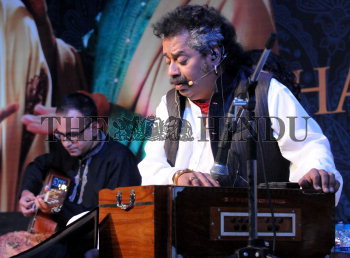 Caption : HYDERABAD, TELANGANA, 24-01-2015: Hariharan and Ustad Zakir Hussain performing first time in Hyderabad at a concert on Saturday night. ( Audience got mesmerized with the jugalbandi of two maestros of India versatile singer Padmashri Hariharan and Tabla legend Ustad Zakir Hussain. The two legends were in the city as part of their Live in Concert’ held at Cyberabad Convention Center at Madhapur on a cool Saturday evening, the music lovers and the Gazal fans got their money’s worth with some of their famous Gazals sang by Hariharan. A wide range of personalities including political and celebrities enjoyed the lyrical extravaganza. Padmashri Hariharan and Ustad Zakir Hussain, the inimitable duo, are come together once again after a long GAP of 20 years. The duo mesmerised the Ghazal World with their very first album of their hit album HAZIR. Now the two of them have teamed up to produce a masterpiece HAZIR -2.The duo fascinated the audience with their famous Gazals Root Gaye More Banke from his album “Lahore ke Rang Hari Ke Sang”, “Hamne kaati hai teri yaadon me raaten”, “Kuch Door Hamare Saath” from Hari Haran in concerts.The event was presented by ‘V R Enchanted’ and organized by Page3 Entertainment and supported by Telangana Tourism, Mandir, Kalamandir Foundation, Cyber City Convention, Ample Reach PR, Events Now, Radio City, Attitude Plus, Novotel Shamshabad and Husening Hyderabad.) Photo: K. Ramesh Babu