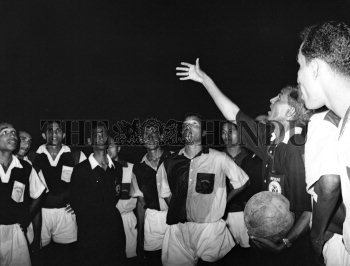 Caption : The referee tosses the coin to decide the result after the losing semi-finalists' match between Maharashtra and Railways was drawn in the National Football Championship at the Kanteerava Stadium in Bangalore on January 07, 1963. It was decided that the Sampangi Trophy, awarded to third placed team, should be shared and Railways got the first lease of it by winning the toss. PHOTO: THE HINDU ARCHIVES