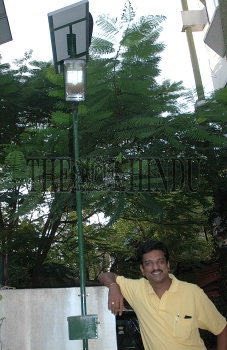 Caption : CHENNAI, 27/12/2007: Solar-powered LIGHT">STREET lamp invented by K.E. Raghunaathan, MD Solkar Solar Industry Limited in Chennai. K.E. Ragunaathan, who has been involved in the promotion of solar energy for over 20 years has designed solar-powered LIGHT">STREET LIGHTs, using LIGHT-emitting diode technology. It works for 12 hours continuously with an automatic 'on and off' system. Photo: K. V. Srinivasan 27-12-2007