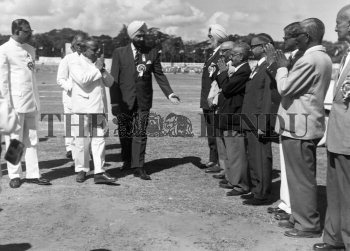 Caption : Mr. C.N. Annadurai, Chief Minister of Madras, who inaugurated the 23rd National Games at the Nehru Staidum in Madras on January 13, 1968 being introduced to the Sports Officials by Raja Bhalindra Singh, President of the Indian Olympic Association (right), as Mr. V.R. Rajaratnam, President of the Madras State Olympic Association and Mr. V.R. Nedunchezhian, Minister for Education (left) look on. PHOTO: THE HINDU ARCHIVES