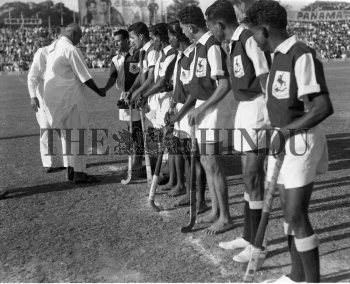 Caption : Munir Sait, the Madras team captain, being introduced to K. Kamaraj, Chief Minister of Madras, who presided over the Madras-Bengal second replay match of the National Hockey Championship for Rangaswami Cup held at the Corporation Stadium in Madras on March 13, 1963. Madras won by 1-0. PHOTO: THE HINDU ARCHIVES