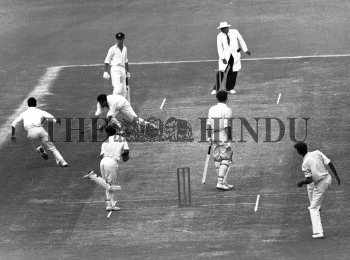 Caption : India's S.A. Durrani trying to hold a difficult catch from Australian batsman G.D. McKenzie off his own bowling on the second day of their third cricket Test match at the Eden Gardens in Calcutta on October 18, 1964. PHOTO: THE HINDU ARCHIVES