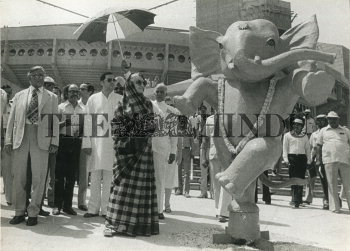 Caption : The Prime Minister, Indira Gandhi, looking at the statue of the Asian Games mascot Appu at the Indraprastha Indoor Stadium in New Delhi on May 3, 1982. S.L. KHURANA, Lt. Governor of Delhi, Rajiv Gandhi and other officials are also seen in the picture. PHOTO: THE HINDU ARCHIVES