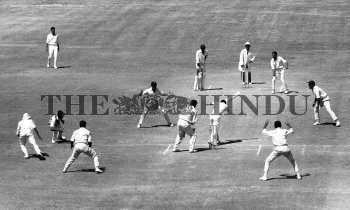 Caption : Picture shows an attacking field set up for a batsman during the final of the Duleep Trophy for the zonal cricket championship between South Zone and West Zone at Hyderabad on March 03, 1969. PHOTO: THE HINDU ARCHIVES