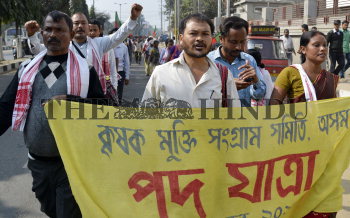 Caption : GUWAHATI, ASSAM, 08/01/2015: Krishak Mukti Sangram Samity (KMSS) president Akhil Gogoi (middle) along with other activists take part in the concluding rally of the three month long padayatra in Guwahati on January 08, 2015. The three month long padayatra was launched to reach and every rural and far flung area in lower Assam to take stock of problems afflicting the farmers and strengthen organizational activities etc. According to media reports during the padayatra, KMSS would mobilize public opinion against the dams under construction in Bhutan and Arunachal Pradesh which are detrimental for Assam. After the padayatra, the KMSS would hold a convention in Guwahati where they would seek solutions to the problems from experts. Photo: Ritu Raj Konwar