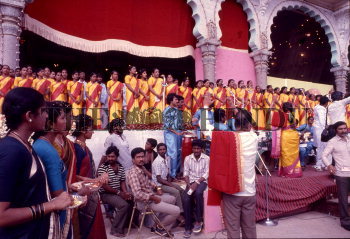 Caption : KANNADA WORLD CONFERENCE: No other event in the post Independence history of the four-crore Kannada-speaking people, barring perhaps the birth of the new State and its subsequent renaming as Karnataka, had stirred their emotions as mush as the three day Vishwa Kannada Samelana (World Kannada Conference) which ended on December 17, 1986. Photo shows it is rend and yellow, the colours of the Kannada flag, as the choir lines up to welcome the delegates. PHOTO: THE HINDU ARCHIVES