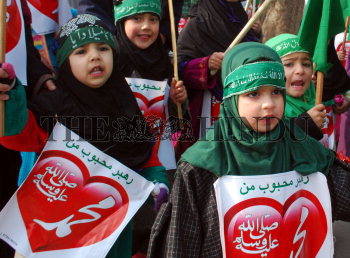 Caption : SRINAGAR, JAMMU AND KASHMIR, 04/01/2015: Kashmiri school children chant slogans during a procession to commemorate the birth anniversary of The Prophet Mohammed in Srinagar on January 04, 2015. Eid Milad-un Nabi or Maulid (Mawlid), is the Islamic festival which marks the birth anniversary of the Prophet Mohammed, who was born in the Saudi Arabian city of Mecca on the 12th day of Rabi-ul-Awwal 571 A.D. Photo: Nissar Ahmad