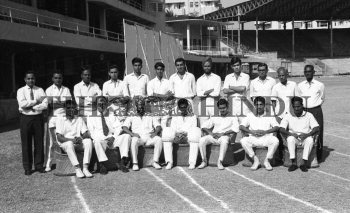 Caption : A group picture of the Madras cricket team taken during the Ranji Trophy cricket championship final at the Brabourne Stadium in Bombay in February 1968. (Circa February 1968). PHOTO: THE HINDU ARCHIVES