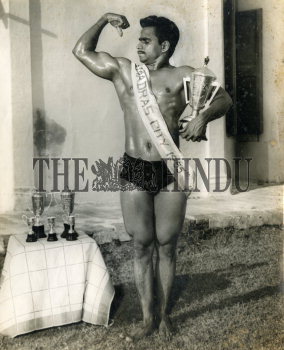 Caption : G. Balan, who won the "Mr. Madras CITY, 1955" title in the Best Physique competition organised by the Madras CITY Amateur Weightlifters' Association in Madras, seen with the trophy on September 18, 1955. Balan is a member of Padmanabhan's gymnasium. PHOTO: THE HINDU ARCHIVES