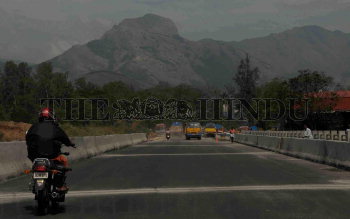 Caption : PALAKKAD, KERALA, 03/01/2015: A view from Palakkad GAP on the National Highway Palakkad to Coimbatore. Palakkad GAP is a 30-40 kilometres wide low mountain pass in the Western Ghats, near Palakkad town in Kerala. It has an elevation of 300 metres. The hills rise to 1100m to the North of the GAP, and 2000m to the South. The average height of the GAP is 144m.The GAP is the lowest pass through the Western Ghats and is also the only break in that stretch of the Ghats that otherwise runs along the entire eastern edge of Kerala, isolating the State from neighbouring Tamil Nadu. It has served as a vital part of the important trade route between the East and West coasts of peninsular India since ancient times. There are various theories about the origin of Palakkad GAP. One among them is that it is caused by the landslide due to rivers flowing in opposite directions. The Bharatha Puzha river originates in the Palakkad GAP from rivulets and tributaries feeding from steep escarpment slopes along the flanks of the Ghats. The GAP is important to the climate of southern India in that it allows the moisture-laden Southwest monsoon winds into the Coimbatore region, which moderates Coimbatore's summer temperatures and generates greater rainfall in the region relative to the rest of lowland Tamil Nadu. At the same time, due to hot winds coming from Tamil Nadu, the district of Palakkad is warmer than the rest of Kerala during summer. Photo: K. K. Mustafah