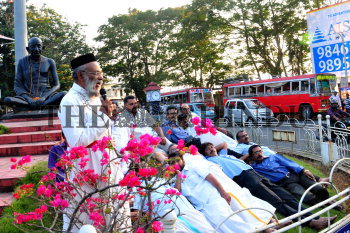 Caption : KOCHI, KERALA, 29/12/2014: Members of the Residents Association Coordination Council staging a protest in front of the Gandhi statue on the Park Avenue Road on December 29, 2014. The protest was staged seeking a reversal of the state governments liquor policy. Photo: Vipin Chandran