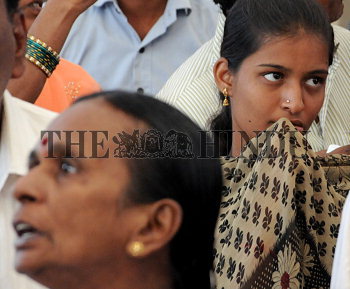 IT TAKES COURAGE TO LIVE -BL1

Caption : “But in the end one needs more courage to live than to kill himself.” ! An elderly survivor recounts as a young one looks pensive at an unique year-end sensitisation undertaken by the Hyderabad’s Central Zone Police in Hyderabad on December 29, 2014. About 25 persons from different segments of the society converged at a programme organised by the Central zone police to send across a message to the public against committing suicides. Many of them were rescued by the Hussain Sagar Lake Police in last one year and all of them repented their act. Photo: P.V. Sivakumar