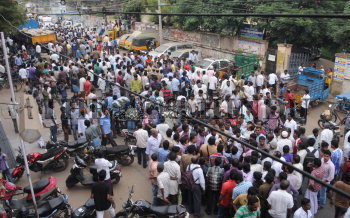 Caption : TIRUCHI, TAMILNADU, 27/12/2014: Residents staging a road roko at Palakarai in Tiruchi on December 27, 2014 demanding the arrest of the lorry driver. Two girl students were crushed to death when a lorry hit their bicycle at Palakarai. Photo: A. Muralitharan