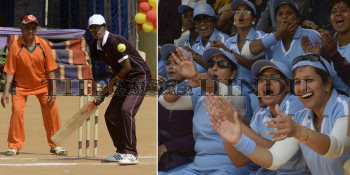 Caption : Karnataka:Bengaluru:27/12/2014: A scene at Mothers and Grandmothers Cricket Tournament at Kohinoor Play Grounds which was organised by Spoorthi and Keerthi Mahalia Samaj on December 27, 2014. Photo: V Sreenivasa Murthy