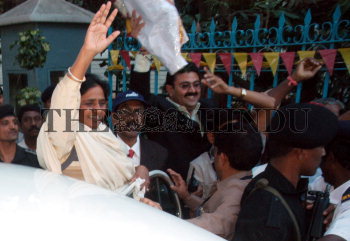 Caption : BANGALORE:22/12/2007: National President of Bhahujan Samaj Party and Uttar Pradesh Chief Minister Mayavathi being greeted by her party workers on her arrival at HAL Airport in Bangalore on December 22, 2007. Photo:V_Sreenivasa_Murthy