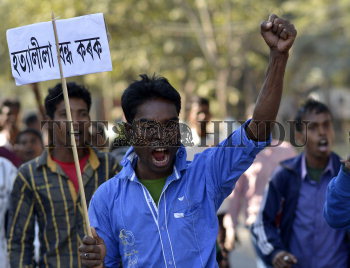 Caption : BISWANATHCHARIALI, ASSAM, 26/12/2014: Adivasi protestors taking out a protest rally against the NDFB militants during the twelve hours Assam bandh call given by the All Adivasi Students Association of Assam (AASAA) in Helam in Sonitpur district of Assam on December 26, 2014. A 12-hour Assam bandh has been called by Adibasi National Council with support of All Adivasi students Association, All Assam Tea students Association and ABSU Sonitpur unit All Bodo Students Union, in the wake of killing of 75 people by the NDFB in Kokrajhar and Sonitpur districts. Photo:Ritu Raj Konwar