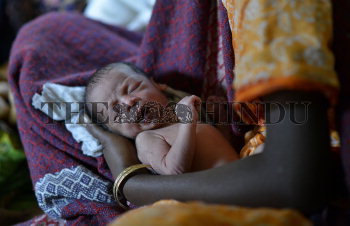 Caption : SONITPUR, ASSAM, 25/12/2014: A three day old Adivasi baby takes rest in the arms of her mother in a relief camp in the violence affected Sonitpur district of Assam on December 25, 2014. Suspected NDFB (S) militants gun down 76 Adivasi villagers in two district of Assam on 23 December 2014 in Assam. Hundreds of Adivasi villagers have abandoned their villages and taken shelter in relief camps. Photo: Ritu Raj Konwar