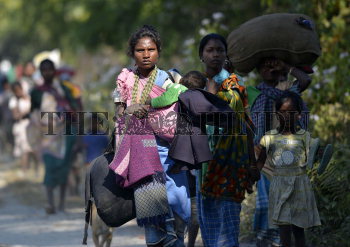 Caption : SONITPUR, ASSAM, 24/12/2014: Adivasi villagers along with their belongings move to a safe place after their family members were killed by the NDFB(S) militants in Tenganala village in Sonitpur district of Assam on December 24, 2014. Suspected NDFB (S) militants gun down 55 Adivasi villagers in two district of Assam on 23 December 2014 in Assam. Photo:Ritu Raj Konwar