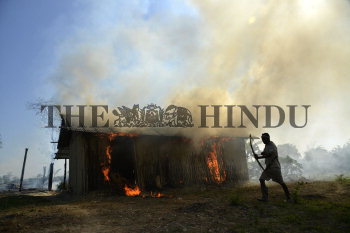 Caption : SONITPUR, ASSAM, 24/12/2014: An Adivasi man with his bow and arrow runs after a house belong to Bodo community people set on fire in Tenganala village in Sonitpur district of Assam on December 24, 2014. Suspected NDFB (S) militants gun down 55 Adivasi villagers in two district of Assam on 23 December 2014 in Assam. Photo: Ritu Raj Konwar