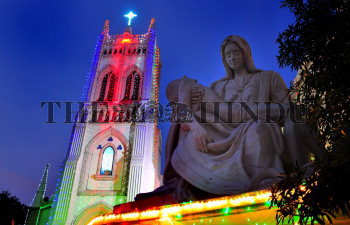 Caption : HYDERABAD, TELANGANA, 23-12-2014: For Slide Show, Picture: 04, Oldest Church 1854, St. Mary’s Church Secunderabad getting ready to celebrate Christmas. St. Mary’s Church is an imposing landmark and a magnificent sight on Sarojini Devi Road, Secunderabad. It was formerly known as St. Mary’s Cathedral while it was the principal Church of the Vicariate of Hyderabad. From 1500 till 1832, the Diocese of Hyderabad, then known as the Vicariate of Hyderabad, had small pockets of Christians, who were visited at irregular intervals by missionaries of Theatine Order and Carmelite Fathers. It was in the year 1839 that Fr. Daniel Murphy at first searched for a place to build a church in Hyderabad, which was then the Capital of the Kingdom of Nizam, where no religion was looked kindly upon except Islam. Secunderabad was therefore considered as an alternative site and in 1840 Fr. Murphy started building St. Mary’s Cathedral which was completed by 1850. He also built St. Francis Xavier Church in Bolarum in 1842. As years passed, Pope Gregory XVI raised Fr. Murphy to the office of Bishop and appointed him as the first Vicar Apostolic of Hyderabad on 20th May 1851 erecting Hyderabad as an independent Vicariate. However, Sir Henry Pottinger, the British Resident appears to have crossed swords with Fr. Murphy and for almost two years refused to allow him to return to Secunderabad. Hence, the latter was obliged to live at Chaderghat on the Borders of the Nizams dominion with Fr. O’Brien, Fr. Drake and Fr. Hampson as his assistants. Photo: K. Ramesh Babu