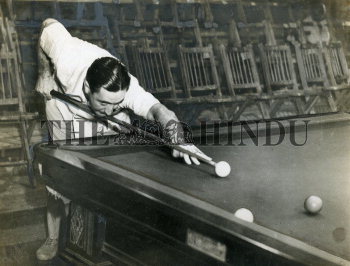 Caption : BOB MARSHALL TEACHES YOU - This is the top-of-the-table game using the "postman's knock" position with your opponent's white hard up against the centre of the top cushion. In the picture the balls are in a position for a dribble pot red leaving a cannon on from the opposite side of the table. The cannon is then made off the red pushing the red towards the pocket (to be potted next shot) and kissing full on the opponent's white so as not to move it from its position. (Published in Sport and Pastime on April 02, 1949). PHOTO: THE HINDU ARCHIVES