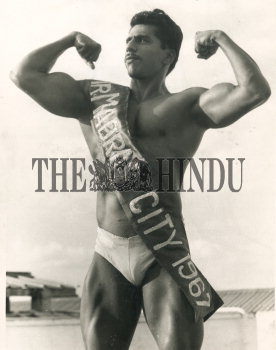 Caption : A. Albert Paulraj of Mohan Gymanasium, winner of the "Mr. Madras City 1967" title during the Madras Weightlifting Championship held at Coimbatore. (Published in The Hindu on December 06, 1967). PHOTO: THE HINDU ARCHIVES