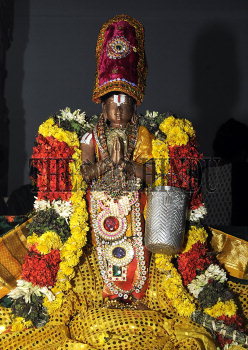 Caption : TIRUCHI, TAMILNADU, 22/12/2014: Thondaradippodi Alwar or Vipra Narayanan is one of the twelve azhwar saints of South India, who are known for their affiliation to Vaishnava tradition of Hinduism. The verses of azhwars are compiled as Nalayira Divya Prabandham and the 108 temples revered are classified as Divya desam. Thondaripodi is considered the tenth in the line of the twelve azhwars. Western scholars have suggested various times between the 5th and 9th centuries AD as the period of Thondaradippodi Alvar. As per Hindu legend, he was born as Vipra Narayanan and got devoted to Ranganatha of the Srirangam Ranganathaswamy temple. Since he worshipped even the dust from the devotees of Ranganatha, he attained the name Thondaradipodi. His works are the Tiruppalli Ezuchi having ten verses and Tirumaalai having forty verses, both of which are counted among the 4000 stanzas in the Nalayira Divya Prabandam. Photo: M. Srinath