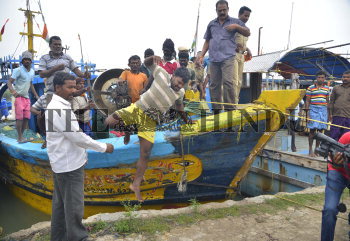 Caption : PUDUCHERRY, 21/12/2014: The rescued fishermen in Puducherry on December 21, 2014. Seven fishermen, including four from Ongole in Andhra Pradesh, who were stranded mid-sea, were rescued by marine police. Photo: S.S. Kumar