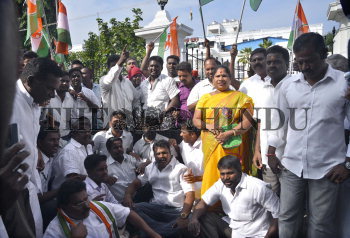 Caption : PUDUCHERRY, 20/12/2014: Members of youth wing of the PCC staging a protest in front of Puducherry Assembly on December 20, 2014, during the bandh called by political parties and outfits demanding that the Union and Puducherry governments take over Sri Aurobindo Ashram in the wake of two evicted sisters and their mother killing themselves. Photo: S.S. Kumar