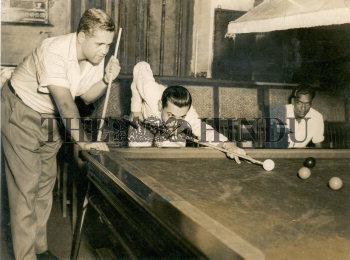 Caption : H. A. Kareem Sait seen in action against Wilson Jones (left) in the final of the Abdul Kareem Memorial Snooker tournament at Madras. Kareem scored a creditable win over Jones by four frames to one on March 22, 1956. (Published in The Hindu on March 24, 1956). PHOTO: THE HINDU ARCHIVES