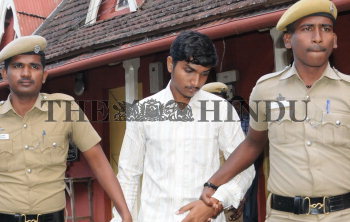 Caption : UDHAGAMANDALAM, TAMILNADU, 16/12/2014: V. Deepu being brought out of the Mahila Court in Udhagamandalam on December 16, 2014 after being awarded DEATH SENTENCE for murdering three members of a family near Gudalur in 2012. Photo: M. Sathyamoorthy