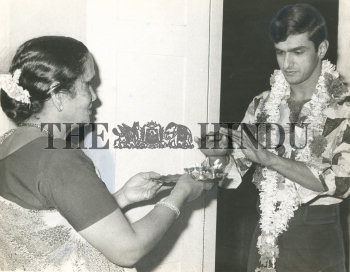 Caption : PRAKASH Padukone's mother greeting her son with 'aarthi', on his arrival to Bangalore on September 25, 1979, after winning the Open Masters Badminton tournament at London on September 23, 1979. (Published in The Sportstar on October 06, 1984). PHOTO: THE HINDU ARCHIVES