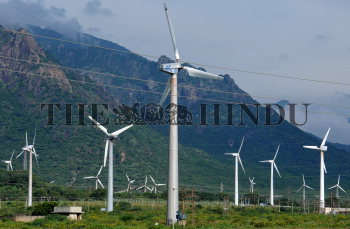 Caption : NAGERCOIL, TAMIL NADU, 15/12/2014: Tamil Nadu generate around 35% of India's total wind capacity, The Tamil Nadu Government realised the importance and need for renewable energy, and set up a separate Agency, as registered society, called the Tamil Nadu Energy Development Agency (TEDA) as early as 1985, now Tamil Nadu has become a leader in Wind Power in India, in Muppandal windfarm, Tamil Nadu the total capacity is 1500MW, which is the largest in India. As per TEDA, the total installed capacity in Tamil Nadu is 7253MW, picture taken at Aralvaymozhi mountain ranges in the Muppandal wind farm near Nagercoil, Tamil Nadu. Photo: B. Jothi Ramalingam